Published by Priyanka in German Language · 29 May 2019

Some of you may understand what I am talking about. But for those who are still German beginners may struggle in reading it. Don’t worry friends, you are already halfway in achieving German proficiency. You might wonder, why not use a translator to understand it, but that’s not the right way to shrug off your shoulder.

Friends, in order to learn German better and achieve world-class proficiency, we prefer you should get enrolled yourself in the best German language classes located in Kharadi and all over Pune. The German experts and professionals have opened new German learning institutes all over Pune which has allowed the German beginners to begin their German language course without any hassle.

Ok, let’s get back to the core of this blog, in the beginning, I have stated all the sentences in German to encourage you and push you to the edge for learning German. This blog is all about introducing you to some great ideas to learn German fast, so what are you waiting for? Let’s begin it. At your service German Tutor presents a detailed step by step guidelines for how to learn German fast. With proper usage, of following set guidelines, helps you in achieving all the goals.

Discover the true essence of the German language

For many German beginners, learning German has become havoc and the worst nightmare to experience. Don’t worry friends it’s just a myth, we are here to help you and guide to learn the fundamental of the German language. Basically, learning any foreign language requires commitment, dedication, and love towards the language.

Accomplishing the set goal leads to more confidence and guide you to rise above the success bar. To keep that spirit alive, you need a daily dose of motivation and inspiration which will help you to stay online on the details of the German language course.

For those who are lost in the chaos for them, the German Tutor has put together some tips to ease the learning process. Let’s understand it one by one,

Evaluate the importance of learning German
Are you a German enthusiast? I know it will be a big, yes, to keep that tempo on for 24*7 just get enlighten with some basic facts about German language and its global importance for learning and having proficiency in it.

· Economic point of view:
1. Germany’s economy is a highly developed social market, which is open to all international cooperation.
2. Being the World’s 2nd largest exporter globally it has the largest national economy in Europe.
3. With such glory, it ranks number four Worldwide by nominal GDP.
4. In addition to this, Germany also opens its gateways to many international students and job seekers who want to build a strong career in the German market.
5. With a welcoming culture, Germany opens many opportunities for international investors to invest in the market.

· Know some facts:
1. Calculating in terms of native speakers in the European Union, Germany ranks number one as compared to other native speakers such as Spanish, English, or French.
2. To glorify it more, German Language is among the ten most commonly spoken languages throughout the World.
3. Looking at the other perspective, Germany offers free-tuition universities for everyone (even for non-Germans) with a high quality of education and cultural activities.
4. As a highlighter, Germany is one of the largest car producers, this invites many international job seekers to apply for the position.
5. The success story still continues, as Germany has a Nobel Prize in Physics, chemistry, medicine, and literature. On top of all this, they are the world leaders for offering the best engineering.
6. The German language finds similarities with the English language as they share the same origin.
For example, Buch = book, Hand = hand, Name = name,and many more such words resemble each other.
7. With such a wide scope, many aspirants are learning the German language with keen interest.

· Think wisely :
Before getting enrolled for learning German it is always advisable to know its past & future. At a glance, German is the language of renowned poets, physicians, writers, artists, and scientists who have well proficiency in the German language. Some of them are Goethe, Weber, Einstein, Kant, Hegel and many others.
To bring to your notice, German is the second most common scientific language in the world. Also, nearly 18% of the Worlds books are published in German which has opened new gateways for having world-class higher education. The western world’s most important work is published in German and continues to be produced in German.

Germany, being so efficient offers new opportunities for many German learners to fly their dreams and accomplish their set goals.

In the beginning, it may seem tricky and the worst puzzle to solve, but don’t lose hope, just follow your German language class tutorials and rest is taken care of. To fasten the progress rates, you need to follow the professional’s guidelines. To make the entire process of German learning fit in the specific timeline, is actually not possible but what is possible is how efficiently you grasp the language and use it in your day to day life.

The most important part to make the entire process smooth and swift is how consistently you study and practice all the exercises listed in the German language course. With good speed and regularity in studying, it’s possible to finish your German learning in 5 to 6 months. On a daily basis, what you can do is, just follow these steps,

Which rules to follow while learning German?
In order to learn German efficiently and effortlessly what matters the most is to follow some rules, which will accelerate the German learning process. With years of experience and advanced training, teachers have truly understood the core idea behind using hacks and tricks while learning German which includes,

Experts say it’s all about mastering the basics and its always advisable for all the German beginners to practices the alphabet first. In all, there is a total of 26 alphabets in German just like we have in English but what differs is the pronunciation. Practicing the right pronunciation helps in developing assent skills. 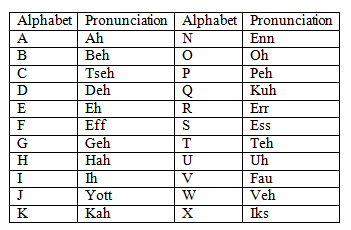 The next major thing is to focus on the elephant in the room i.e. German language grammar. Each subject gets its true meaning and importance through Grammar but it’s also very factual that Learning German grammar is a tedious job. But as we all know to conquer the highest peak first, will always save your time and energy hence, German experts suggest learning German grammar by being stress-free.

To summarize, German grammar has six tenses that are,
Prasens = present tenses

We know this co-relation is not exactly the same but it will give you an idea to understand German Grammar better. As an interesting fact to know, German grammar has three noun-preposition for each gender like,
Die = is used for feminine nouns

Der = is used for masculine nouns

Das = is used for neutral gender

Wow, so many points to remember, but it’s always fun in learning German Grammar as it comes with a new perspective, each new word you learn must come with Grammar in one form or the other. Don’t make it fuss, just relax and enjoy the true beauty of the German language.

Getting a zest, of learning any foreign language entirely depends upon how closely we observe, study, experiment and use the language in day to day life. The same is the case while learning the German language if you observe the fun and entertaining part of the language you will automatically get attracted towards it and fall in love with the language.

To set your motivation on fire, our in-house experts suggest starting using basic German phrases & idioms in your German learning process. The list down expressions below is some of the basic German daily-life expressions, which you can study and try to use in your dialect.
Wiegeht’s? – How are you?

Vielen Dank! – Thank you very much!

It’s always boring to finish the whole study course by only reading books to make it more funny and interesting let’s learn some funny words.

Actually, these words sound funny because the German language cannot be translated exactly. Hence it makes sound funny while reading.

Every language is beautified with phrases and idioms, which you have to understand beyond its literal meaning. The German Language has plenty of idioms and to understand them better is the true key point. Idioms are expressed as figurative meaning which depicts the true culture and history of the language. Going to its depth, we found an English idiom may relate to German idiom but they literally can mean different.

In English, we say “piece of cake – (doing things with ease and joy)” and the same is said in German as “Das schaffeichmit links” both are poles apart. Learning some of the German idioms will surely give some creative sense of expressing your thoughts. So while learning German, try to use idioms to express your feeling. Some of the examples of German idioms are,
Da stepped der Bär

Learn from your mistakes

It’s always observed that many German words sound similar to native English pronunciation like when you say “bekommen” it may sound like “ to become” in English but it has a different meaning. There are many such words that sound like each other, but they have different meanings. Another common mistake that German beginners make is, using the preposition. There are no fix rules to use the preposition, it entirely depends on your memory. Through daily practice you can master the skill, another common mistake many of you do is the word to word translation which is not valid while learning German. In the German language, the structure of a sentence may differ when you try to compare it with your native language. For example, “Dem Jungen gab icheinen Ball – I gave the boy a ball” in this example if we follow word to word translation it would be said as “The boy gave I one ball” you see it has no meaning. Also, many German beginners fall prey to pronunciation mistakes like the “z” in German is spelled as “ts”. Major clash in pronunciation is observed between the two vowels “ö”, and “ü” in English such sounds does not exist hence it becomes tedious to learn German.
Speed your German learning with free Apps

To speed your German learning process what’s expected is to follow some guides like this by which you can speed up your German Learning process. The other process by which you can speed up the learning process is by following some YouTube channels who guide you well and train you well in developing your skills. Another creative way is to watch German movies, listen to music, and downloading free German Apps which provide you a better solution to brush up your skills.

Anki is the App which is free to download for learning German vocabulary through flashcards, which can be customized by your own text, sound or images. Memrise is another App through which you can socialize and learn at the same time. Many other features are also offered in this App, once you are done learning German you can switch to other subjects. Like this, there are many other online resources and mediums through which you can study.

Friends, don’t hesitate to ask your query to your tutor, feel free and confident while learning German because at the end what matters is following your own dream with passion.